A Destiny Decades in the Making 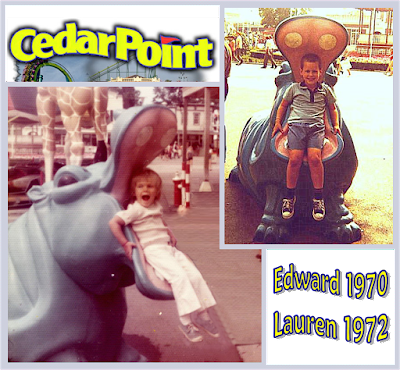 My darling husband and I "met" at a mutual friend's Christmas dinner on a warm, snowless Christmas day. Although Edward and I became fast friends, best friends with a frightening number of things in common, it was another year before we saw God's hand moving us from best friends to best relationship anyone could ask for - we married another 18 months later.

Those of you who have been blessed enough to marry your best friend, you know how lucky you are, but you also know God frequently has a sense of humor in that situation.
One of the things I find most amusing about God's plan to bring us together is the number of times He crossed our paths prior to that pivotal Christmas dinner.
One year before that, Edward and I worked in the same office building for about a 3 month cross over where, although he was on the 3rd floor, and I was on the 2nd, we came in at the same time and there were only two elevators. We HAD to have been in that elevator together at least once, if not frequently.
A decade before we "met" the recruiting firm I was working for was working with his company to assist with building up a new staff at a new location. I remember being the liaison to that company ... we HAD to have spoken on the phone one or several times.
Over two decades before we met, although I was living in Michigan and Edward was living in West Virginia, our families both took summer trips to Cedar Point - a popular roller coaster park in Sandusky, Ohio. I'm sure that every little kid that's been to Cedar Point has had their picture taken in one of those silly blue hippos.
I have to wonder how many times Edward and I actually encountered each other throughout our lives and just never realized it was all part of God's plan for our future as husband and wife.
You gotta love God's plans ... and the way he executes them!
3 comments:

Bible Busting Bulletins and Stokes in the Margin 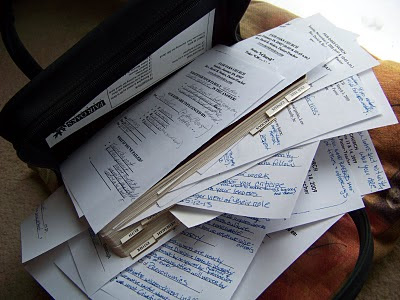 My Bible cover is getting harder and harder to zip closed - I have flashes that soon my husband will have to sit on it like an over-stuffed suitcase just so I can get it to church and back. Edward bought it for me as a gift about a year before we moved up here, and since then I’ve kept all of my Sunday church bulletins (or more accurately, teaching notes) in it, at whatever page was the focus of the sermon or message.

I actually went through them all this morning (what else do you do with 26 inches of snow outside your door and covering your TV’s satellite dish) and found that, with well over 200 bulletins bulging out of my Bible, about a quarter of them are in the Old Testament and the other three quarters in the New Testament. There are nearly 20 message notes from my old church in Florida, Creekside Alliance, but the majority of them are from Pastor David R. Stokes’s sermons at Fair Oaks Church.

Although over a year ago Edward created a special filing system where I could keep all of my sermon/teaching notes by Bible chapter so they’d all still be in the same order, I resist taking them out of my Bible. I love sitting down for the Sunday sermon, looking in the new bulletin to see where we will be today, and opening up to that page in the Bible to be reminded what I learned from this passage before from a previous message.

If they were tucked away in a very well organized 3-ring binder on the shelf, I might miss my weekly reminiscing of Stokes-isms in the margin. I realize I’m biased here, but Pastor Stokes is an amazing preacher. And, as great as his messages are, and how catchy the alliterations in his teaching notes are, sometimes there’s real gold in the margins: the spirit-led Stokes-isms that flow from the pulpit, but weren’t a part of the outline so you franticly jot down them in the margin.

Here are some of the nuggets I found in my margins:

~ Faith is conviction based on revelation. (Lather, Rinse, Repeat series)
~ The next time you feel like your leader isn’t pleasing you, ask yourself if they are pleasing God. (Detour series)
~ The L.S.D. of the Bible – Lust brings forth Sin, Sin brings forth Death. (Notorious series)
~ Trials are placed in your life by God to draw out the best in you; Temptations are placed in your life by evil to draw out the worst in you. (Faith series)
~ F.E.A.R – False Expectations Appearing Real. (Guilangriefear series)
~ Lust: any desire that is out of bounds or out of balance. (You’ll Shoot Your Eye Out series)
~ Be content with what you have, but never with who you are. (Chapter 11 series & Worship series)
~ Conviction is constructive, guilt is destructive. (For Crying Out Loud series)
~ Tactics without strategy = business without purpose. (Current Events & Coming Attractions series)
~ Sometimes when you get into ritual, you get away from reality. (Worship series)
~ The will of God – nothing less, nothing more, nothing else. (Wasted Series)
~ Can’t afford to tithe? Do the math… you’ve spent more than 10% of your income on bad choices and what did it get you? (Wasted series)
~ You don’t have to wander too far to get outside the Will of God. (Wasted series)
~ Sin is spiritual leprosy. (Marvel series)
~ The shortest distance between the human heart and the Truth is a story. (Grace Anatomy series)
~ Repel sin through insulation, not isolation. (The Others series)
~ Seasons of loneliness are unavoidable, even for the faithful and committed. (The Gospel According to The Beatles series)
~ If you spiritualize without spiritual eyes, you’ll find spiritual lies. (The Flip Side series)
~ What a person does is what a person believes, regardless of what he says. (Church? Why Bother? series)
~ To the extent you are working for God, you are fulfilling the purpose of your salvation. (The Flip Side series)
~ Works are not the root of salvation, but the fruit of salvation. (The Flip Side series)
~ The only part of your salvation people see is what you do, not what you think. (The Flip Side series)
~ The closest thing a believer will experience to Hell is this Earth; the closest think a non-believer will experience to Heaven is this Earth. (Rabbit Ears series)
~ People are incurably religious – if you’re not worshiping God, you’re worshiping something. (The Flip Side series)
~ Some people are “dating” spirituality, but not willing to get married to it. (Faith series)
~ Motivation without implementation equals frustration. (Faith series)
~ Embrace the pendulum – finding deeper joy in deeper crisis. (Faith series)
~ Success is not what you are compared to someone else; success is what you are compared to what you could be. (Add It Up series)
~ Church is a hospital for sinners, not a museum for saints. (Add It Up series)
~ The greater the purity of your heart, the greater the clarity of your vision. (Simply Worship series)

There were a few others I couldn’t make out and a few that, out of context, I couldn’t figure out (on one of them I had “Cool Hand Luke” written next to a chapter:verse) but there are some of my Stokes-isms from the margin.

Did I miss any of your favorites?
4 comments:

One of these days, Edward and I will make it to Punxsutawney for Groundhog Day. It a special movie for us and a special day for us for a handful of reasons from the films "Somewhere In Time" connection, to my husbands uncanny ability to spot 20 groundhogs on any trip we take (including wandering in the middle of a theme park once), to the coincidental milestones that have been marked by February 2nd throughout our relationship. Either way, a great movie - a great day.

I love this website - http://www.groundhog.org/ - The official website of the Punxsutawney Groundhog Club. Check it out. It's hilarious!

More of my favorite clips...

A few days ago I published tongue-in-cheek a post about INTJ's in the role of counselor. Unless the editors at CPP were drunk when the MBTI bible went to print, you won't find empathy and compassion on the INTJ "common characteristics" list. Not that we're not capable (I like to think I transcend many of the INTJ stereotypes) it's just not likely for an INTJ to choose an occupation that exercises those muscles. Although I might make the observation that since INTJ's like to dissect and solve puzzles and may be far better suited to be empathetic in dealing with other people's feelings (as long as they don't have to disclose their own feelings) they could make excellent counselors, but I digress ...


Although counseling is certainly a part of what I do, the better part of my last two decades have been spent in the Human Resources discipline. Another unlikely career choice for an INTJ for similar reasons. Although I thank God for my verbal filter, this cartoon certainly has played through my head on more than one occasion when handling employee complaints: 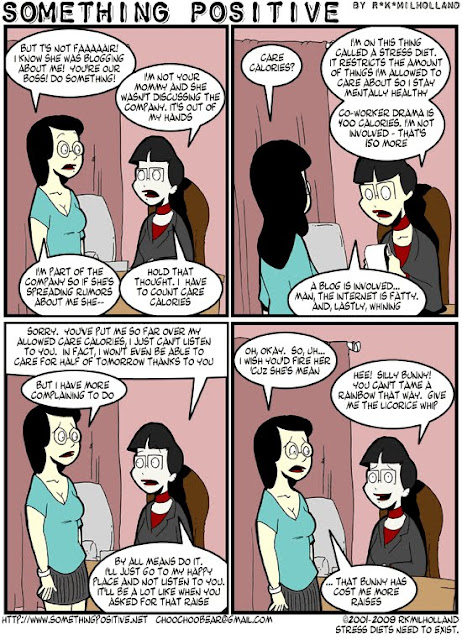 I also discovered a Google group a few months ago of INTJ pastors discussing their common challenges in ministry roles related to their type. Talk about a Typological challenge!
Of course, the INTJ loves a challenge. Even the grim reaper will have trouble taking the most stubborn INTJ down!

Member of the Financial Coaching team at Fair Oaks Church which provides one-on-one, step-by-step confidential financial assistance to help people structure their finances in such a way that they can prosper the way God intended and honor Him with their financial stewardship.

At Fair Oaks Church one of our five purposes is to prove God through giving. This can be a challenge especially for those who are struggling in the area of finances. We desire for everyone to be able to experience the blessings that flow from getting your finances in line with God’s will. Find out more about our FREE Financial Coaching Ministry here at Fair Oaks Church.