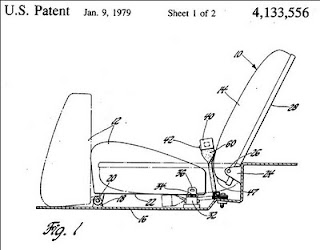 My father worked for General Motors for a third of a century (a tenure unheard of, these days). A design engineer in the safety restraint arena, he earned several patents during the time he worked for GM.

I remember in the 4th grade for career day he came into the class and brought in a seatbelt that he had designed the latch for and explained how the lock and release mechanisms worked. Very cool (for a geek like me).

Long before there were federal or state laws about wearing seatbelts, there was Dad’s Law. There was no way in our household you were going anywhere without your seatbelt on. Sure, I went through a little teenage rebellion (who didn’t) but it only takes one good 55mph rear-ending that throws your car into a poll and the seatbelt kept you in the car to bring that lesson home. Of course the two pizzas sitting on the passenger seat were not wearing their seatbelt. They were not as lucky.

Last week my sister sent me this video and it just really brought me back to the bizarre slow-motion experience of that accident (and one other I experienced as an adult with my babies in the car) and why it’s so important to wear your seatbelt.