Who Do You Think You Are? 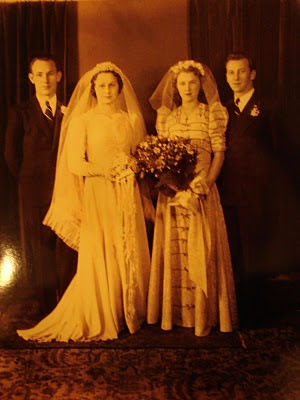 I’ve always been interested in genealogy and my family’s history. I always enjoyed listening to my elders tell the family stories (even if I’d heard them before) but wish I’d had the presence of mind to write it all down.

My family’s history in this country isn’t that long. Most of my ancestors – on Mom and Dad’s side – came over around the turn of the century. On my mom’s side, they actually still have relatives in Ireland that they know, have connected with and even visit in the mother country fairly regularly.

My husband, on the other hand, has a lengthy American history filled with veterans of the Civil War, the Revolutionary War and, according to a genealogy Edward’s mom had done about 20 years ago, a direct descendent of Daniel Boone.

We’ve been watching that new show on NBC “Who Do You Think You Are?” (Friday nights at 8:00) in which celebrities are tracing their family tree to learn about their roots. It’s been cool to watch and has generated new interest for us in tracing our family tree.

In just the few weeks since we registered with ancestry.com, we’ve been able to find 725 direct ancestors going back more than 14 generations on Edward’s side, tracing many of the lines back to their country of origin.

That may sound like a lot, but not when you do the math. Everyone has:

So if you look at the one line on Edward’s side that I was able to go back 14 generations to Reverend Henry Dillingham, born in 1568 in Cottesbach, Leicestershire, England. At the 14th generation, you would have 16,384 12th Great-Grandparents in that generation alone. When you add it up from your 2 parents to the 12th great-grands, that’s 32,766 relatives to find (and that doesn’t include brothers, sisters, cousins). So my 725 seems like a drop in the bucket. I don’t expect to find them all – nor will I try – but it’s been an interesting journey.

I’ve teased Edward a few times about some of the things I’ve stumbled on in his “Tree” like a great-grand father in the late 1600’s who was a juror (twice!) in the Salem witch trials and a blood line that leads to the Whites of New Jersey in the 1500-1700s joking that he may be related to his buddy David.

In the bigger picture, of course, because I believe in the word of God as a literal Truth, I believe we’re all direct descendants of only one person, but I don’t think Ancestry.com would ever get us back to Noah (I’d say Adam, but Noah and his family were Adam’s only surviving descendants after the flood, right?).

Anybody else out there watching the show or tracing their roots?

Email ThisBlogThis!Share to TwitterShare to FacebookShare to Pinterest
Labels: family tree, Roots, who do you think you are

well . i just don't see what's the point in tracing it ?

In '87 when Dad died, he was working on his geneology and wanted to prove or disprove the family legend that we descended from Daniel Boone. He didn't get to finish it, but I had it finished by a friend a few years later. Sure enough, we are 5th great-grandson's of old Dan. His daughter, Sarah, married a Hays and is a direct link to us. Not sure if Eddie knows this.

genealogy has become one of my favorite late-nite activities! i have 'connected' with 'family' online, thru snail mail and via telephone in the past few months and plan to share your 'math' with some of them!

so exciting to learn of ed's family tree... with the love you both have for early american history, it must be great to place his ancestors in times and places you have researched or even visited!

always secure in the embrace of our loving lord, we are surely never alone.... but finding out where we 'stand' in the history of our family and our world brings on another kind of belonging that is very special to me now that my mom and dad, sister and brother have all been called home to glory.

love to you and the 'boys', mary