My dad lives out in Prescott Arizona with stepmom Sandy so we don’t get to see them very often. As this Father’s Day was approaching, I started to think about some of my favorite moments with my Dad and thought I’d share some of them here.

When I was little, I called my dad “Daddy Guy.” I don’t why … and I don’t know if I actually remember that or if I just remember being told that, but darn cute just the same, right?

My earliest and most enduring memory of my dad was of him playing the guitar. One of my favorite pictures of my dad and me was of me at about 8-months old sitting on his lap between him and his guitar, me peaking over the top to watch his fingers. The photo, unfortunately, was lost in hurricane Katrina (but that’s another story).

There was always music in the house growing up. Sometimes we would just sit around in the living room with one of Dad’s favorite song books and sing. A great memory. Dad’s electric (a vintage Supro that he still has and I covet) was very cool, but the one he played the most (and the guitar from the lost picture) was the Giannini classical acoustic which was made in Brazil. I have that one now and it’s the one I started teaching my son Derek on years ago.

When I was in the first grade, I had Pneumonia and was home sick for several weeks. I remember one day after my dad got home from work, he sat down on the couch to watch TV and I came out and sat with him to watch a bit. I snuggled up next to him and put his arm around me and I promptly started vomiting all over him. My dad swiftly scooped me up in his arms and started running my down the hall to the bathroom, me vomiting the whole way, with my mom chasing after us yelling “Stoooooooop!!! I rather clean one spot than three rooms!” A classic memory.

A true testament to my geek-dom, one of my favorite memories of my dad is when I was in the 2nd grade (or so) and he helped me with my math homework. It was dividing single and double digit numbers onto three and four digit numbers and I was struggling with all the steps to remember in the long division. My dad (an engineer) looked at it, somewhat dismissed the need to learn that stupid-long-division crap, showed me the short way (which – light bulb - made total sense to me) and I walked away thinking my dad was a genius. He had taught me some "secret trick" that my dumb old teacher probably didn’t even know (I thought). I looked at my dad very differently after that. It may have been the first time I realized he was a person outside of being my dad in our house, and that I really had no idea who that was. A transformative memory.

A couple of years later, my dad came to my class for career day and demonstrated a safety restraint that he had designed for General Motors (a seatbelt to all the other 4th graders) but I remember thinking how cool it was that my dad invented that. I actually blogged about that and Dad’s patent back in April (Embrace Life). 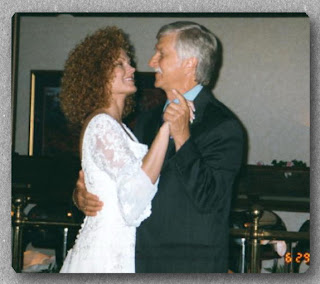 My Father and Bride dance at my wedding was one of my favorite moments with dad. It’s one of those things that I’d always wanted to do as a part of a girl’s “dream wedding.” It wasn’t something that we got to rehearse so I was surprised how perfect it was and discovered that my dad is a really good dancer. So good he made me look good, like we’d been dancing together for years. He made that moment perfect for my wedding day. A precious memory.

When the boys were just 1 and 2-years old, my life took a hard left for the surreal and my young family ended up moving in with my dad and Sandy for 6 months. What could have easily felt like a major life setback ended up being such a blessing… especially for the boys. At just a few years old, the boys got to experience a concentrate of their grandparents just before they moved out to Arizona which created a lasting bond and memories that might have otherwise been a void. Of course, I have a lot of fond memories of my own during that 6 months as well. As a young adult and early in my professional career, I was able to have conversations with my dad on a level we’d really never e 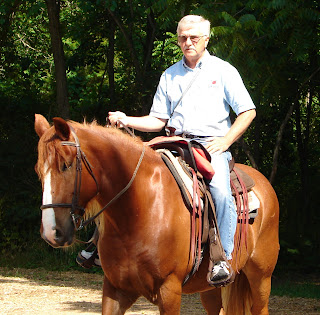 xperienced before together. It was cool and I wouldn’t have traded that time for anything. A personal growth memory.

So here were are, Father’s Day, and the last time I actually saw my dad was for a Father’s Day trip he made out to the DC area in 2006. Edward and I took him and my stepmom out to Gettysburg for a horseback ride through the battlefield. I wish we could afford to see each other more often (trips out West are way overpriced) so for now, this trip down memory lane is the closest thing to a visit we can afford.
Happy Father’s Day, Dad!

awesome post Lauren - my Dad was an amazing man - my greatest regret in life is that my kids never got to meet him.