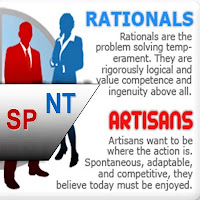 INTJ mother: No… how are you trying to use it? Maybe I can help you find the word you’re looking for.

ISFP: I’m not trying to use it. It just came to me…. Can YOU use it in a sentence so I can figure it out?

INTJ: If it’s not a real word - has no actual meaning – there’s no way to use it in a sentence.

ISFP: But if it WERE a word, how would you use it?

INTJ: There’s no way for me to answer that. Without a meaning – because it ISN’T a real word – I can’t use it in a sentence.

ISFP: Okay… what would its meaning be, if it were a word?

INTJ: But it’s not a word. So how would I know its meaning?

ISFP: Well, if you’d just use it in a sentence, we could figure out its meaning.

INTJ: Are those lights flickering? I think you’ve induced a brain aneurysm.

I wish I were creative or funny enough to have made that up, but that was an absolute real conversation I had with my ISFP teenage son the other day (although there were just a few more “Who’s on First” loops before I escaped the exchange).

Now I’m sure an I/E NFP parent would have handled the conversation differently – perhaps played along and played “create a definition out of thin air” but as an INTJ that was not an instinctual direction for me to go.

How would you have responded? (Include your “Type” if you know it.)

I would have responded sooner but I was laughing so hard I lacked the motor skills.

I probably would have played along. I'd have been the nerd who tried to link it to a Latin root - even if none existed. Which is why you're type rules the world & mine runs around in silly hats making up nonsense. : )

Oh Lauren, that is funny, because he sounds just like Tristan trying so hard to make something work in his own little world. Not sure what Tristan is, but being an ESFJ, I would have looked in the dictionary for the word, not finding it, ended the conversation rather abruptly and probably told him to make up his own definition. Shame on me.

Hi. Yes, as an INFP, I would basically try to tell him anything that could help him figure out what the word could mean. For example, "gribit." Well, it sounds like something grey and small, possibly a piece of gooey dirt stuck somewhere, or a spect of dust. Also, could be a small rodent. Or something annoying. The meanings just come to us Ne types.

Tracey - I sooo see your type trying to link the Latin root of a word that isn't real, but silly hats and nonsense is not a typological fit. Rather I think it's a spiritual gift straight from God which we all envy.

Monica - no shame on you. You would have put more into it than I did. I would be curious what Tristan's type is. He is old enough to take the MBTI now if you ever wanted to know.

Whisper - I love the detail you just when into to expand on your explanation. I could could see my ISFP son doing the same thing. Must be am I*FP thing. :-)

Lol I'm a isfp. Thats cute and funny. I do the same thing. Like the other day I told my mom "This taste very caramely" she responded "Caramely? Hunny that is not a word" I told her "I know, but that's the word that came to me to describe this frappe" lolol