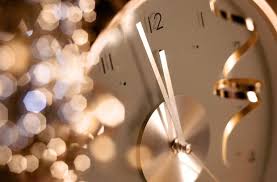 The list could probably go on and on which tells me it’s probably a wasted effort to try and predict the future. No matter how well you plan and no matter how much you think you know, God’s the only one who’s got a shot at penning that list. And as much as I’d love to rip His list open on January 2nd to see what this next year will hold, I know he’ll only let me see it one line at a time … and I’m okay with that.